On June 7th, the 70th Anniversary of D-Day,
On board the USS Missouri (the ship on which General MacArthur accepted the Japanese surrender at the end of WWII),
2nd Dan Blackbelt, Stephen Huff son of Sr. Master Michael and Barbara Huff was promoted to Lieutenant, US Navy,
Lt. Huff is currently the Fire Control and Training Officer on the Destroyer, USS Hopper based at Pearl Harbor, Hawaii 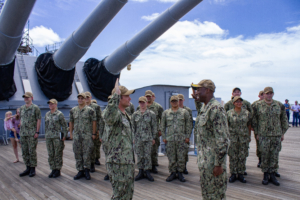 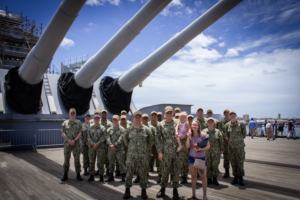 Rodgers Institute would like to recognize the following vets.

Mr. Burt Cox enlisted in the Marines and served from 1968 to 1971 during the Vietnam War. He did 1 tour in Vietnam and received the Purple Heart Medal for injuries sustained while serving. Mr. Cox became a radio operator and served as squadron leader. Mr. Cox left the Marines with the rank of Corporal.

Brad Glanz served in the US Air Force from 1991 to 2013.  Brad flew F-16’s through numerous tours of duty which include Iraq, Afghanistan and many other deployments. Brad retired from the Air Force with the Rank of Major.

Service to our Country

Sergeant First Class(SFC) Fuhs was born and raised in Grand Rapids Michigan. He enlisted in the United States Army as a Supply Specialist on November 16, 2002. He completed Basic Training in 2003 at Fort Jackson, South Carolina. SFC Fuhs completed Advance Individual Training in June 2003, earning Distinguish Honor Graduate at the United States Army Quartermaster Center and School located at Fort Lee, Virginia. He completed the Civil Affairs Specialist Course and graduated on the Commandants List in August 2003.

SFC Fuhs’s military and civilian education includes: Airborne, Warrior Leaders Course, Advance Leaders Course, Army Combative Level 1, Combat Lifesavers Course, Military Mobile Force Protection Course, Unit Supply Specialist Course, and the Civil Affairs Qualification Course. He is a graduate of Forest Hills Northern High School class of 1990. He earned his Black Belt in the first degree in the martial art style of Tae Kwon Do. He is a graduate of Grand Valley State University class of 1996 with a Baccalaureate of Science in History and Political Science.

He is married to the former Amy Lynn Green of Pittsburg, PA and they have a son Jack George Fuhs and a daughter, Rachel Elizabeth Fuhs (deceased)

The Story Behind the Coins

The coins were a gift to me from Some South Korean Non Commission Officers that I meet while serving in Iraq. The South Korean Army forces were stationed in the town of Erbil in Northern Iraq in 2004. These soldiers were responsible for helping the Iraqis citizens rebuild roads and water systems. As a Civil Affairs Soldier working humanitarian aid missions in the same area; we had the opportunity to work with these fine soldiers.

During one of these joint missions, a conversation about Tae Kwon Do came up between me and these Korean NCO’s. I mentioned that I had earned my black belt in Tae Kwon Do. They asked who my grand master was and I told them Tae Zee Park. They know the name and we talked about Tae Kwon Do and at the end of the conversation, I was given two sets of coins. One set was for me and the second set was to be given to Grand Master Park upon my return home. I returned in November 2004 and immediately returned to Iraq for my second combat tour in December 2004.

The coins were entrusted to my father before I departed, who in turn entrusted the set to Mr. Barss for safe keeping until I returned and could present them to Grand Master Park. Now ten years after first receiving these coins from some very respectful Korean NCO’s, the time has came for the coins to move on to the intended recipient.

With the passing of my brother this spring, Mr. Barss and I were able to talk about these coins and how best to present them. My ability to do so in person seemed impossible; as I have an occupation that has me ready to leave on a moment’s notice and I am normally away for several months at a time either to the Middle East or Africa. So I asked Mr. Barss to present this coin set on my behalf.

To Grand Master Park and Mr. Barss I wish to thank you both for the guidance you provided. I carry the life lessons of your teachings with me today and as best as I can; pass them on to others. You both have had a very large part of me being successful today. You taught me resilience and patience. You passed on the passion of teaching to me and I use it to teach others. I thank you

This coin set is one of less than 2000 coin sets that were produced specifically for the ROK army unit that was serving in Iraq. Today you hold a very special set that are very limited and a little piece of history. I hope you find joy and pride in receiving them like I did when I was given them 10 years ago and to know you are not forgotten by me and others like me.

If you wish to further the experience, education and enhancement of taekwondo through World Class Tae Kwon Do, please click the Donate link. We welcome your donation to this tax deductible organization. Thank you, in advance, for your generous support.
Click here to Donate.