If you wish to further the experience, education and enhancement of taekwondo through World Class Tae Kwon Do, please click the Donate link. We welcome your donation to this tax deductible organization. Thank you, in advance, for your generous support.
Click here to Donate.

This testing was in addition to a 2 day seminar taught by Master Instructors, Senior Masters, Junior Grand Masters, Grand Masters and included special teaching by Grand Master Tae Zee Park.  Attendance was up this year and on Saturday the 6th, concluded the day with a color belt and black belt testing followed by a celebration of the event with music and delicious food!  The event is Hosted by Mid South Lewis Institute of Tae Park Taekwondo annually. 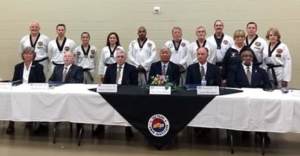 Rodney BeanMaster Instructor
Started TPI in 2002
Instructor: Master Randy Wrona
1st Dan: November 1, 2003
2nd Dan: November 5, 2005
3rd Dan: November 6, 2010
4th Dan: April 8, 2016
I started teaching TKD for the City of Wyoming Parks and Recreation on September 26, 2011 and continue to this day. I am married with 3 beautiful daughters. For the past 20 years I’ve work as an IT Specialist for the United States Bankruptcy Court, Western District of Michigan.